I find it fascinating to see where people have come from. I don't mean geographically, although that can certainly be interesting but where people descend from or more to the point, who they descend from. Because the reality is we all are here because two people fell in love, were betrothed, or were arranged to marry before they were potty trained. After watching a few episodes of "Who Do You Think You Are?" I was hooked on how far back genealogy could go. After seeing Cindy Crawford get traced all the way back to Charlamagne it was just too much for my curiosity to sit idle and just wonder. So I hopped onto a free trial of Ancestry.com.

It wasn't as easy as they like to portray, at least not for the slightly attention deficit, energy depleted mothers of the world. Or just me. The little "leaf" didn't always pop up and sometimes when it did it gave me information on other people because they had a name similar to one of my people. I know on my mother's side that her grandfather came from Sweden in the 1890's and settled in Chicago, because isn't that where all the Swedes settled? He had several siblings he left behind so I am pretty sure I have some distant relatives just waiting to welcome me to Sweden. I wouldn't mind finding them. My great-grandmother, his wife, on the other hand is a mystery to me. She met and married my great-grandfather in Chicago and followed him to New Britain when he finished seminary. My mother's mother's people I know nothing about and there were no leafs to help me out.

So I moved on to my father's side. I managed to find an ancestor of my grandmother's, a Stephen Blazier who was a carpenter living in Georgia in the mid 1800's. But I lost the trail from there. I was kind of excited I got that far since my grandmother was never one to talk much. Most of my conversations with her were one-sided. I talked, she listened. I like to talk and she was a good listener so it worked out.

A few months ago one of my cousins on my father's side sent me an email inviting me to view her family tree on Ancestry.com. I looked at the page she had sent and she had not gotten past our mutual grandmother. So I emailed her and told her about my Georgia find, feeling quite proud of myself until she emailed back that I needed to click on individuals to go back farther and she had traced us all the way back to the 1300's in England on our grandmother's side.

I was so excited I could hardly sit still. I was so impressed she had managed to trace one line of our family so far back. She told me it had helped that she had been sick in bed for a couple days because honestly I think you need to devote yourself and hours to just reading hand written censuses until your eyes water and blurred vision feels like the new normal.

She also mentioned that she traced our grandmother's side back to a woman named Agnes Webb who appeared to be an aunt to William Shakespeare.

William Shakespeare! To be or not didn't even matter, just the idea that we had some watered down relation to the Bard was enough to make me want to order new stationary with the Shakespeare crest. 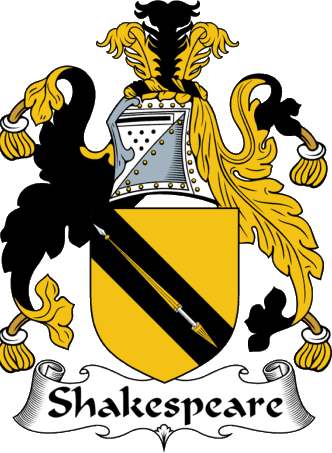 Then we find Philip Blazer( not a spelling error, the spelling of the name changes.) Phillip(1773-1854) married Ann Lewis and this is where the fun begins. Bear with me! Now if we follow Ann's line, which would be my four times great-grandmother, we find that her line began in England. Ann was the daughter of Jacob Lewis and Catherine (Freeman) Lewis, who it would appear might have died either while giving birth to Ann or shortly thereafter as her death is documented in 1776 the same year Ann was born.

Jacob (father of Ann and my five times great-grandfather) was the son of Thomas Lewis(1715-1763), who was born in New Jersey, in Colonial America and Ann Dandridge(1715-1808), also born in New Jersey but her older siblings were born in England. Ann Dandridge ( who if I am doing this correctly would be my six times great-grandmother) was the daughter of John Dandridge ( 1655-1731) and Bridget Dugdale. Both resided in Oxford,Oxfordshire,England until their immigration to America. They are my seven time great-grandparents. From here we follow the Dandridge line.

And here is where it would help if either I or my cousin was someone famous then the producers of "Who Do You Think You Are?" could sweep in and fly us off to England where we could perhaps unravel the mystery of why John and Bridget immigrated to America. But whatever their reasons if we still keep going we find William Dandridge(1613-1638) married Ann Boiling.( Not Ann Boleyn because that would be another crest of arms and I would be claiming rights to the throne or perhaps I would just keep that to myself after all.) This makes them my eight times great-grandparents. William was the son of Sir B. Dandridge (1580-1604) and Elizabeth Webb, my nine times great-grandparents.

Still with me? Hang in there the end is close!

Now we follow the Webb line. Elizabeth was the daughter of Richard Webb and Agnes Webb, my 10 times great-grandparents. Now Agnes seems to have been a Webb prior to marrying Richard(most likely they were cousins) so when we follow her line of Webbs we see that Agnes was the daughter of Sir Henry A Webb (1510-1544) and Grace Arden(1514-1539). These folks are my 11 times great-grandparents. Sir Henry had one brother and four sisters. His sister, Abigail, married Richard Shakespeare. Which would make Richard my "uncle" 12 times removed or perhaps many ore times removed, at this point I would need professional help. They had a son named John , who I suppose would be a cousin 13 times removed. John Shakespeare, who if I am following my own line correctly becomes a cousin 14 times removed, married Mary Arden and they had a son named William. TA-DA!

Confused? Yes so am I. I am still not sure I am calculating this perfectly well. I will be seeing my cousin in March and I am hoping we might find some time to view the lineage. What is remarkable as I was researching all the work my cousin did, was the realization that last names start to appear more frequently the farther you go back. Meaning there was inter-marrying of cousins. While I was trying to figure out if Sir Henry and Grace Arden were indeed my 12 times great-grandparents I came across several articles explaining lineage and ancestry. The website Olive Tree Genealogy was very helpful. The article linked here is what made me take a closer look at the last names. It explains that if we just doubled our great-grandparents back 10 generations we would have potentially 1024 ancestors and if followed all the way back to Charlamagne it would be an astounding 281 trillion, which is impossible. http://www.olivetreegenealogy.com/misc/ancestors.shtml

I think it is fascinating where we come from. And each great-grandparent comes with siblings who marry and have children. And this is only tracing back my grandmother on my father's side. My father's dad, it appears had his beginnings in Germany. While I was researching all of this my husband peered over my shoulder and saw that my great-grandfather had married Lucy Ann Totten. "We have Tottens!" He exclaimed. I just nodded and made a mental note to add that the growing list of things I probably should have found out prior to saying "I do." But the reality is he and I could be cousins several times removed; several, several times removed. He is also competitive, which I did know ahead of time and wants it to be stated that our children also descend from a very famous radish farmer from Germany, which is why he loves to garden.

So think of the possibility this presents. The world feels smaller with all the technology we have. We can skype, facetime, instant message. But the truth is the world has always been small. In some way we are related to more people than just the cousins on our mom's side or the crazy uncle on our dad's side. We are all a tribe. Perhaps that is why when we find someone who becomes a great friend there is more to it than just two people who have stuff in common. We could have DNA in common!

As I went back through our family history, Shakespeare notwithstanding, and the reason I gave the breakdown of all their names and dates was to give a visual for the people who came before me. The people who contributed to my love of writing, reading. Perhaps that is why I have an unyielding desire to see England. Or maybe that is why I love tea with cream and sugar. Or maybe it has nothing to do with it because it is so watered down. But I do believe I am the result of all those who came before me. The people who made all the right choices that brought me to this day. Because you see if John and Bridget Dandridge did not leave Oxfordshire, England then their daughter Ann would not have married Thomas Lewis and my story would not have begun. Of course the same could be said for my mother's grandfather who came to America from Sweden. I have not been able to follow his line back...yet. But I am feeling a cold coming on...

Me and my sister with our grandmother,Helen Blazier Drake, our link to Shakespeare.

What the World Needs Now Is Not Lysol

Put a Little Attitude in Your Gratitude

Can You Spare a Square?

What the World Needs Now Is Not Lysol

The Imagination of Faith

A Man of Economy: Lessons from my Father

Give Teachers a Chance: An Open Letter to My Local, State and Federal government

Now You Can Blog from Everywhere!